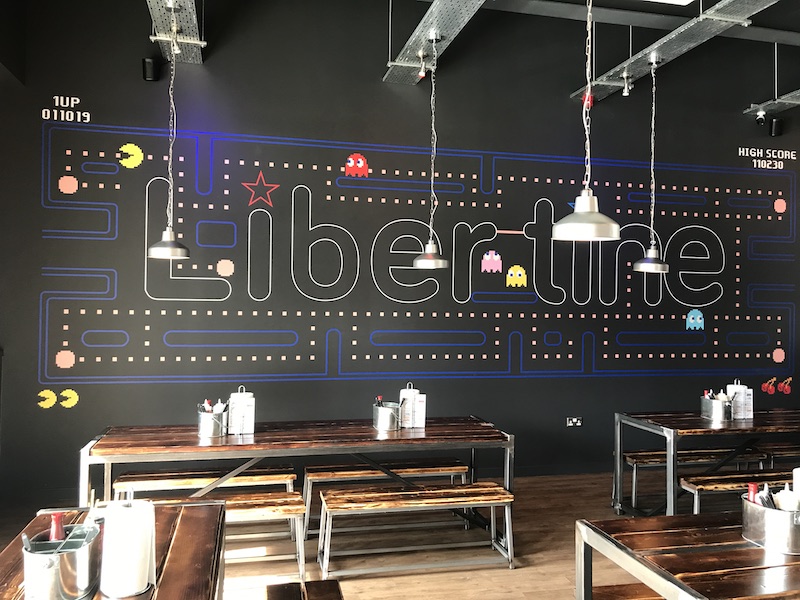 It’s no secret that I was pretty excited about the arrival of Libertine Burger in Rugby. While big cities boast arrivals of new restaurants and bars – independents and chains – almost weekly, you don’t get quite as many in a small town.

With that in mind, for a quality independent business that turns out good food to have chosen little old Rugby for its second restaurant is pretty good news. Yes, I love burgers but it’s more about what it means for the town I live in and its food scene.

It means Rugby is seen as a viable prospect for a quality food business. It means more choice for us when it comes to deciding where to eat, and it means that hopefully other businesses might follow suit and choose Rugby for their next branch or to open their first cafe, bar or restaurant.

Some may have seen my enthusiasm as slightly over-zealous. I’m aware of that. And while I’ve been overjoyed to see that Libertine seems to have taken off in Rugby, I know some people aren’t convinced. They’ll think that £7.50-9.50 for a burger is far too expensive, especially when you can get one down the road for less. I’ve seen the same talk about certain bars or cafes – ‘why would you go there when you can get four drinks for the same price?’

I get it. People want the consistency, predictability and price point of a chain. They want to know the money they spend isn’t a gamble and is going on something tried and tested. It’s the ‘better the devil you know’ argument.

That’s fine. Every chain has its place and I’m the last person to say we should all utterly boycott them. I may not eat in Pizza Express on a regular basis but I’d still be sad to see it go and to lose it as an option. I also quite like the cheapness of Wetherspoon’s now and again – I mean, who doesn’t? But I don’t want those to be the only options when I go out for food and drink in my town. I want choice and variety and I’m fairly sure I’m not alone in that.

This weekend Birmingham lost two of its much-loved independents. El Borracho de Oro and Migas Tapas Bar appeared to have everything going for them – great food, good service and an owner and team with superlative amounts of passion and love for what they do. Yet still they couldn’t make it work in what is an incredibly tough time for food and drink businesses.

That loss may not seem like much, but if two apparently well-established restaurants with a loyal customer base in a thriving city like Birmingham end up having to close, where does that leave similar independents in a small town where there’s arguably less money flying around and much lower footfall?

It leaves them needing our support. I’m not saying everyone has to swerve their old faves and make a beeline for the new independent cafe or bar in town for every single coffee, lunch, breakfast, after-work drink or dinner. But the old hackneyed phrase ‘use it or lose it’, which I’ve ranted about on this blog before, is an old hackneyed phrase for a reason – because it’s true.

If you don’t just occasionally back them, and choose that local coffee place over Costa, or Libertine over Burger King, or the local bar over ‘Spoons, then one day you’ll plan to go and it just won’t be there. That choice will be removed from you and you’ll be back to complaining that there isn’t anywhere different to eat and drink. You’ll be back in that place of having to get on a train for 40 minutes to Birmingham or another city to find a ‘special place’ for that birthday meal or date night.

I’m as guilty as anyone else. I’ve been to El Borracho a few times and it’s been on my ‘list’ for months, and now it’s too late and I don’t even have the option of going again. It’s a salutary lesson to stop talking about some of the places on my list and actually go to them. Because if you don’t, you just won’t have the option.

As for Libertine. Yes, I love their burgers. But I love the choice they bring. In the same way that Inside the 22 adds another option when it comes to drinks, and Treacle’s provides a place other than Costa for coffee and cake, it’s somewhere else for lunch and dinner.

It gives us variety and range, and Rugby is all the better for it. So I’ll continue to back it enthusiastically, along with other quality restaurants, bars and cafes that come to my little town. And I reckon you should too……

This website uses cookies to improve your experience while you navigate through the website. Out of these, the cookies that are categorized as necessary are stored on your browser as they are essential for the working of basic functionalities of the website. We also use third-party cookies that help us analyze and understand how you use this website. These cookies will be stored in your browser only with your consent. You also have the option to opt-out of these cookies. But opting out of some of these cookies may affect your browsing experience.
Necessary Always Enabled

Any cookies that may not be particularly necessary for the website to function and is used specifically to collect user personal data via analytics, ads, other embedded contents are termed as non-necessary cookies. It is mandatory to procure user consent prior to running these cookies on your website.