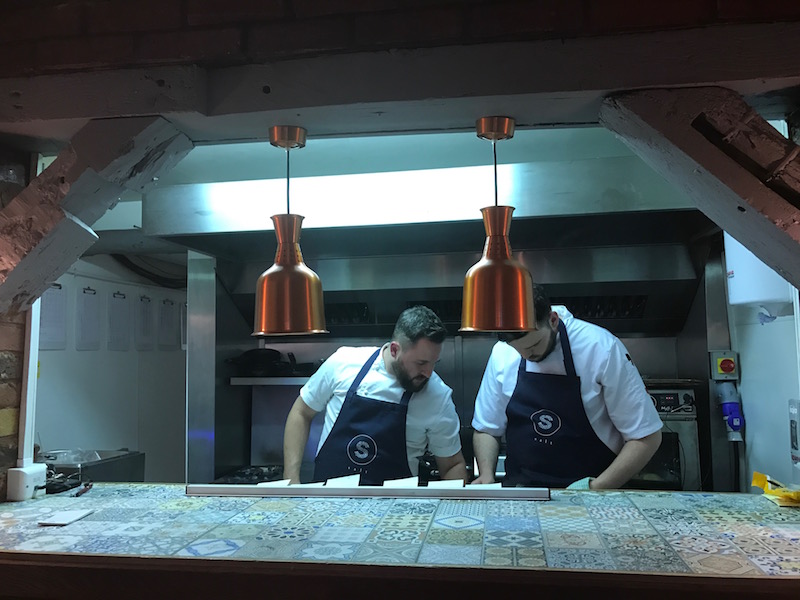 Opening your own restaurant isn’t a cheap business – that’s why there are so many great chefs out there who probably deserve to have their own restaurant but don’t have the financial backing to actually do it. I guess these days modern-day chefs have the advantage that there are a few more options open to people to fund things.

Something that Paul Foster made great use of when he set up a kickstarter campaign to raise the cash needed to set up his own fine dining restaurant. I’d heard about Paul’s efforts back in 2016 and was so chuffed to see this year that he’s achieved his aim and opened his very own place, Salt, in Stratford-upon-Avon.

I’d planned to get along eventually anyway but Paul hurried that up with an invitation for me and Mr M to try Salt’s soft launch a few days before it officially opened. So we toddled on over to Stratford for a midweek dog-free date to check it all out.

Stratford is a pretty competitive place for restaurants, with plenty of independents and big-name chains. Add to that the impending arrival of a brand new complex with even more restaurants and it’s a pretty crowded market.

But the bonus is that the home of Shakespeare brings with it a bucketload of tourists so there’s plenty of business to go round and while they might make a beeline for the names they know or the places right in the centre of town, those of us in the know can seek out the less-known places that are a tiny bit off the beaten track.

Geographically speaking, Salt isn’t too far out of the way really. I’d say it’s about a five or ten minutes walk from the heart of the town centre. It’s fairly inconspicuous, with an equally understated interior that feels warm, charming and welcoming from the minute you walk in.

The central feature of the main room of the restaurant is the open kitchen where you can watch Paul and his team in action – always a good sign of someone’s confidence in the kitchen I reckon.

For our visit, we tried out a six-course tasting menu (don’t worry, it can be upgraded to seven with the addition of a cheese course if you don’t think this sounds enough). To precede it, we were offered some homemade bread served with some gorgeous butter, the kind that you could literally eat with a spoon.

Let me point you in the direction of the crockery at this point – no bogstandard white china here. Everything about Salt has a great personal feeling to it (well, it did to me anyway). Apparently Paul had quite a lot made to add that personal touch and add that to the service and the general look and you definitely get an impression that it’s a labour of love, not just an identikit restaurant opened up by a big corporation in a potentially lucrative location.

Our first course was roast celeriac with yeast cream and beef fat. It might not sound that appetising but it was pretty tasty. I guess Jamie and I both love meat and fat which is a great advantage when it comes to a dish like this but even if you think you might not be keen on it I would really recommend trying it.

A combination of rich, smooth, crunchy, and slightly sweet, it was not like anything I’d tried before (again – the benefit of a tasting menu) but delicious all the same.  In fact, it prompted Jamie to ask the question, “Is it still really bad etiquette to lick your knife in public?” as he did exactly that.

Feeling rather excited after our first taste of Paul’s imagination and skill, we moved on to a roast hand-dived scallop with braised seaweed, seaweed butter and cucumber. A real taste of the sea. The scallop was the same texture as the ones we experienced at the mushroom dinner at The Cross in Kenilworth and apparently the true sign of a hand-dived scallop.

It’s accompaniment was fresh, moist and tasty, bringing even more of the freshness that the scallop introduced to the dish.

Next up was the duck leg tart with prune puree and button mushrooms. Almost a millefeuille more than a tart to be honest, which makes it not only aesthetically pretty but also a good combination of textures. Obviously the prune puree was the perfect complementary flavour, and while I’m not sure I’ve ever seen button mushrooms served raw it made us both realise quite how tasty they are, not to mention eye-catching on the plate.

This next photo absolutely does not do justice to the Aubrey Allen lamb rump served with charred sprouting broccoli and miso broth. The lamb was probably the most tender I have ever tasted, as had Mr M. And while I’m still slightly sceptical about cooking things sous vide, this may have convinced me otherwise.

It was that tender that you could cut it like butter, yet still delicately seared on the outside to make sure any fat was buttery and melt-in-the-mouth rather than rubbery. I’m just sorry that this photo can’t possibly convey to you how good it was.

From there we moved on to Yorkshire rhubarb with buttermilk mousse and pistachio. A kind of mix of a palate cleanser and a dessert really. And while I quite like rhubarb and yoghurty-type ingredients, it didn’t tickle my fancy in quite the same way as some of the other courses. Different, yes. The indulgent treat I look for in a pud, not really.

If I had been feeling slightly deflated the next course put paid to that, and I’ve got a funny feeling that may be Paul’s cunning plan. The chocolate tart with goat’s milk ice and lime zest was a real treat. A warm, moussey, rich feeling with a slight hint of bitterness, all on top of a thin base.

The lime zest added the much-needed acidity to the dish, while the goat’s milk ice was a great twist on the creamy accompaniment that you usually expect, adding that element of theatre and innovation that always impresses.

If we thought that was the perfect end to a great meal, we hadn’t accounted for the little petit fours-style treats that arrived afterwards, including some fabulous choux buns filled with calamanzi (a citrus fruit a bit like a lime) curd. Fabulous!

As you can see, Mr M and I both had a rather lovely time at Salt. The restaurant itself is welcoming and warm with a real feeling of personality and warmth that comes from it being the product of one man’s hard-fought dream. The food was a great taste of a chef’s imagination, complete with the understanding that you can include classic ingredients and flavours but add your own twist.

We had the chance to speak to Paul and within a few minutes it was clear to see the passion and love for what he does within just a few minutes. I’ve got to say, it was a real privilege seeing the result of someone’s love and labours come to fruition and their dream become reality and I have no doubt Salt will go on to be a great success.

After all, he’s done all this through sheer grit and determination. What’s going to stop him now?

We were invited to a complimentary meal for the soft launch of Salt. I wasn’t asked to write a review.

Pin this for reference later

This website uses cookies to improve your experience while you navigate through the website. Out of these, the cookies that are categorized as necessary are stored on your browser as they are essential for the working of basic functionalities of the website. We also use third-party cookies that help us analyze and understand how you use this website. These cookies will be stored in your browser only with your consent. You also have the option to opt-out of these cookies. But opting out of some of these cookies may affect your browsing experience.
Necessary Always Enabled

Any cookies that may not be particularly necessary for the website to function and is used specifically to collect user personal data via analytics, ads, other embedded contents are termed as non-necessary cookies. It is mandatory to procure user consent prior to running these cookies on your website.